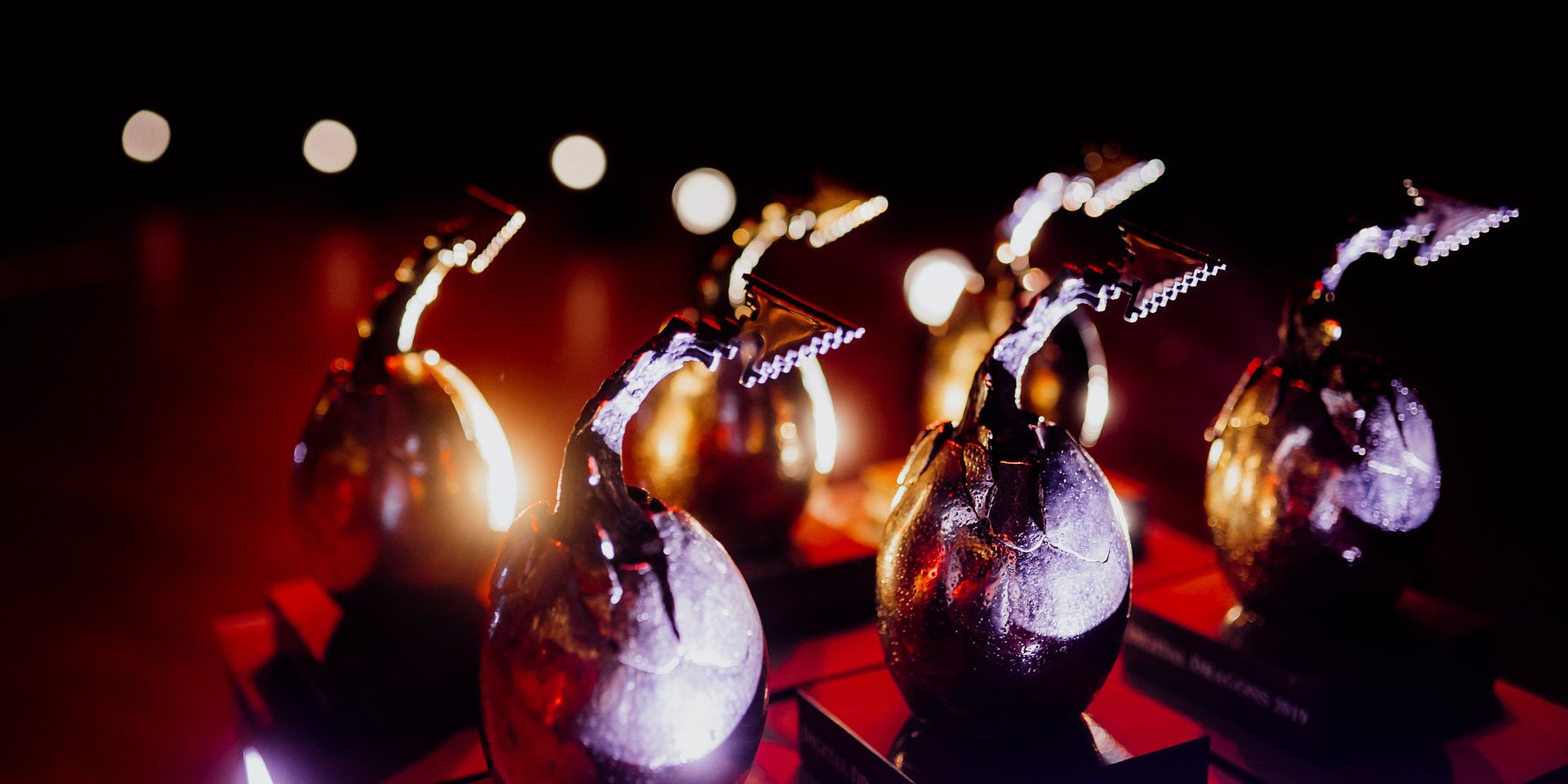 We will learn who the winners of the Digital Dragons, the most coveted and prestigious awards of the Polish gamedev sector, are on 16 May 2022. This year the Award Presentation Gala returns to the exceptional interiors of the ICE Kraków Congress Centre. It will be hosted by Polsat Games anchors, and the event will be rebroadcast at 6pm on 27 May.

This year’s edition of the Digital Dragons is unique first of all because the prizes for the best Polish and global game developers will be awarded for the tenth time. The organiser, that is the Kraków Technology Park (KPT), decided to bring the gala back to the ICE Kraków Congress Centre, which has recently become the venue of regular meetings of the Polish and global crème de la crème of the gamedev sector. At 6 pm on 27 May the Gala will be rebroadcast on Poland’s only TV channel dedicated to gamers and e-sport enthusiasts – Polsat Games. The event is supported by Kraków.
A proof to a great show brewing comes in taking FRENZY on board of the event production bandwagon to manage technical and production issues. The Gala will again be hosted by Radosław Nałęcz and Tadeusz Zieliński, the men behind Faux Paux and other TV programmes. The scene will also be graced by Sonia Wojciechowska of the Kraków Technology Park, connected to the Digital Dragons from their earliest days. The programme of the Gala has a specially arranged music performance slated into it. 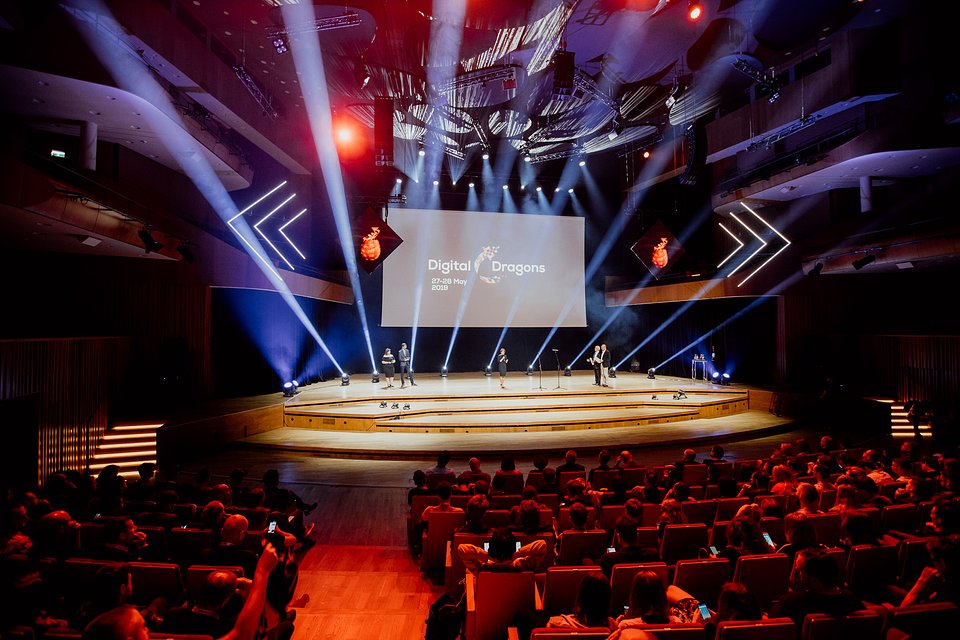 This year, prizes will be awarded in six categories: Best Polish Game, Best Mobile Game, Best Polish Game Design, Best Polish Game Art, Best Polish Original Soundtrack, and Best Foreign Game. The dark horses among the nominees are The Medium from Bloober Team, Chernobylite by The Farm 51 studio, and The Chronicles of Myrtana: Archolos (The Chronicles of Myrtana Team). All of them have been nominated in no fewer than four categories. Apart from those regular prizes, special ones will be presented as well; they are: the Special Recognition Awards of the Decade and the Best Indie Game of the Decade Prize will be awarded.

This year we celebrate ten years of the Digital Dragons. The idea to organise the conference was born within the gamedev environment. The original intention was to appreciate the people working in the sector, at the time still awaiting its great prosperity. That is why we knew for sure from the start that one of the very important elements would be the prizes for the game developers. Our magnificent Dragon Eggs can today be found in many Polish studios, and some of them boast multiple dragon trophies. As this year we also want to show our regard to indie games developers, we will present the prize to the most successful indie game of the last decade. We are very glad to have learned that, recognising the importance of the event, Polsat Games will broadcast our gala on TV.

As the organisers themselves have disclosed, this year’s prize presentation ceremony is one of the most varied in the history of the Digital Dragons. It is worthwhile to remember that the nominations are the work of the representatives of the Polish gamedev. The projects that have qualified to the main competition for the best Polish game belong to very different genres and include a horror adventure (The Medium), Car Mechanic Simulator 2021, a survival horror (Chernobylite), a simulator of turning into an adult (Growing Up), and an extended mod to Gothic II (The Chronicles of Myrtana: Archolos).
The winners will be selected by a jury composed of the representatives of the principal portals devoted to the games, a representative of the academia – Paweł Węgrzyn from the Department of Game Technology of the Jagiellonian University, the editor-in-chief of gamemusic.pl and cocreator of the Game Music Festival – Mateusz Borkowski, and Ola Olszar running the “6 colours of the games” blog focusing on the subjects of diversity and LGBTQIA+ in video games. This year also a representative of the Kraków Film Music Festival (FMF) has been invited to participate in the work of the jury. The festival has been held in Kraków for over a decade and presents, besides film music, music from video games.

It is an honour to be again a part of this exceptional event. The Polish game development sector grows stronger from year to year, and it is important to present its achievements to broader echelons of players in the most appropriate manners. We are certain that the setting of the event, designed together with the Digital Dragons, will be enthusiastically welcomed by all the fans of electronic entertainment.

The idea behind the Polsat Games channel is to provide entertainment to the enthusiasts of video games and e-sport but also to create space for presentation of domestic and global gamedev sector. Besides such programmes as Faux Paux, the examples include transmissions from the key events in the sector, and the Digital Dragons certainly belongs to those. It is a true pleasure for our station to host again an event that is so important for the gamedev world – one that has for years created the positive image of the Polish developers, and awarded them for creativity and ingenuity.

Would you like to attend the Digital Dragons Awards Gala?

Buy your ticket
FRENZY
FRENZY is a production house responsible for establishing and running Polsat Games. The company produces e-sport and gaming events, broadcasts the games, creates content, and designs and runs advertising campaigns. It also makes use of professional automated TV equipment that allows to make reality shows from anywhere in the world. FRENZY was cofounded by Piotr Żak, a member of the Supervisory Board of Cyfrowy Polsat SA, one of the largest digital platforms in Europe, and the largest one in its Central and Eastern part.
KPT
Krakowski Park Technologiczny has contributed to the development of proper conditions for the development of entrepreneurship for 25 years. For 10 years it has managed the Technology Incubator for IT start-ups. The KPT inspires the start-up community by organising numerous events including workshops, hackathons, and conferences that help to verify business concepts. Besides these, it runs KPT ScaleUp acceleration programme. Companies may count on the support of seed funds, tax reliefs offered by the Polska Strefa Inwestycji (Polish Investment Zone) programme, and preferential office space rental conditions. The KPT is particularly focused on Industry 4.0 and the video games industry. It is the leader of the hub4industry consortium aiming to provide comprehensive support for companies wishing to implement Industry 4.0 solutions. The KPT also organises Digital Dragons – the leading games industry event in Europe.
PARTNERS:
Kraków is a modern metropolis with over a million people working in it. Krakow is 150 thousand students, 23 universities, over 200 international corporations employing nearly 80 thousand people in sectors such as finance, IT, services, research and development, business analytics. We base the development of the city, among others on intelligent management and strengthening the sector of modern services and research and development. That is why we focus on innovation and effective cooperation between science, business and local government.
Województwo Małopolskie is the Main Partner of the event: the regional authorities implementing a range of projects that serve innovation and economic development of Małopolska, and its attractiveness for investors. Małopolska is a perfect location for running business, particularly based on new technologies. Evidence of that is the number of new ventures growing every year, including dynamically developing tech start-ups. Thanks to the massive support given to entrepreneurship and the optimal utilization of EU funds and other public funds, Województwo Małopolskie positively stands out among other voivodships.
Third Kind Games
is the Main Sponsor of the event: an independent studio with over 60 employees based in Leamington Spa, United Kingdom, founded on AAA experience by senior developers from Activision (FreeStyleGames) in 2016. Third Kind Games has also recently expanded into Poland, launching a new studio in early 2022. Third Kind Games has experience working with some of the largest companies in the games industry, developing critically acclaimed games and franchises for the likes of Activision, Sony, Nintendo, Codemasters, Crytek and, most recently, Mythical Games. Third Kind Games is the lead developer of Blankos Block Party by Mythical Games, a ground-breaking Play to Earn party game featuring NFT characters and accessories, providing players with proof of verified ownership and authenticity and enabling true player-to-player trading through Mythical Marketplace. Third Kind Games is also currently working on its own IP, alongside an unannounced project with a high profile industry name.
Media contact:

Indie Showcase registration for Digital Dragons 2020 is now open. During the virtual conference, sixty games will have an opportunity to show up on Steam and GOG.COM from 15th to 18th of September. All of the games on Steam with playable demos for the viewers. GOG.COM wi...